Home Thinking and Ideas 2016 04 Artist of the Month: Amelia Beavis-Harrison

Artist of the Month: Amelia Beavis-Harrison

This month we talk to artist Amelia Beavis-Harrison about her practice, which spans performance, research and installation. 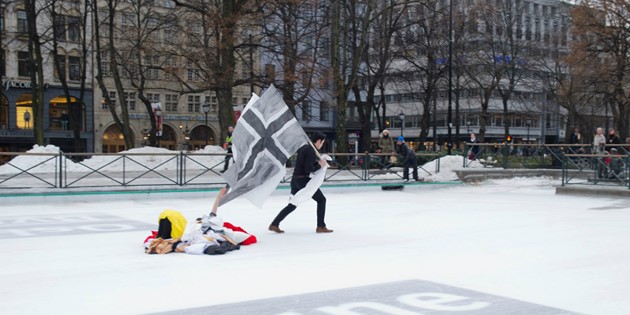 Tell us about your practice at the moment, how would you describe your work?

Over the past few years I feel I have been developing a deep-rooted dissatisfaction with the current political climate, which has led to a growing sense of frustration and urgency that is now coming out in my work. The more political I have begun to feel as an individual, the more I have needed to make work as a reaction. At the same time I have been working significantly with found text as a way to develop performance, may this be through newspaper articles, court room confessions, political speeches and plays. Each of the texts has its own context, space and time that is proximate to itself, but never the less relevant to today. I’m currently working my way through the plays of the Russian Futurist; Vladimir Mayakovsky, and re-interpreting them as performance pieces. The Mayakovsky works are developing into highly visual and colour coded performances where text and choreography move a series of performers around a constructed space. 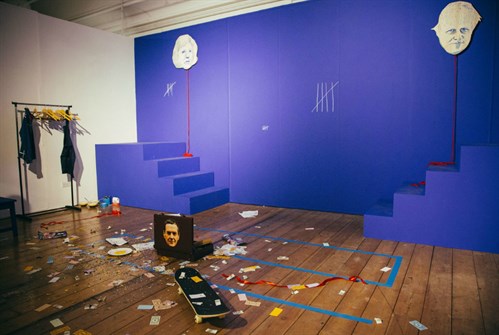 If you haven't been announced, don't come in, 2015 Photo: Greg Milner

I really like the costumes used in the performances, tell us a bit more about designing these? What role do they play in the works?

I use costumes as a visual form of communication, one that often consumes the wearer. Sometimes the costumes have been the only object that has differentiated the situation from an everyday occurrence, at other times they are within a larger environment and part of a bigger narrative. In this way the costumes have a transformative function.

Sometimes I make the costumes myself, but if they are quite intricate I work with costume makers. During the Costumes for Curators series I worked closely with three curators to develop costumes that were made for them to wear for a particular situation. I spent time trying to understand the curators’ personalities and function in their places of work. This process fed directly into the costume design. The designs were drawn from various perspectives and came with a page of instructions which I gave to a costume maker. We then had a meeting about how to construct the pieces and what materials were realistic to use. In this way the works are a multiple stage collaboration as I lose a little bit of control over how the finished work will actually be. 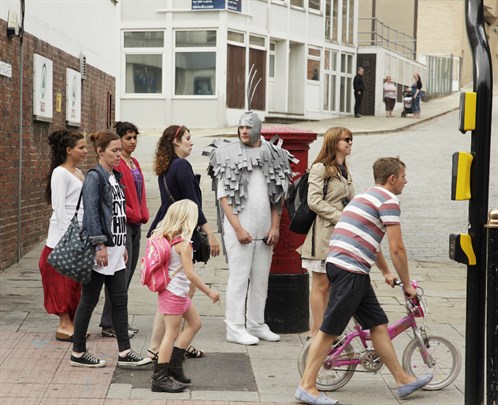 Some of your works are based around historical research, which is reconsidered in a more contemporary context. How do you start this process, by having an idea for a performance or concept? Or from the research itself?

History has always fascinated me, I am interested in the way history is a form of interpretation, and not something that can ever be considered as definitive fact. Both the fictionalisation of history and the atrocities that have shaped the world we live in inform my reading of today. I try to reflect this by bringing historical contexts into a contemporary situations, often drawing parallels between historical situations and contemporary events, exposing the repetitive cycle of life that people at times actively disassociate from the contemporary. My works start from a gut reaction to start researching a particular event or situation which has led me to archival material in the North of Norway as well as the legal records surrounding the Irish Magdalene Laundries. It is only when I have been researching the material for some time that the ideas for the performance begins to take shape. 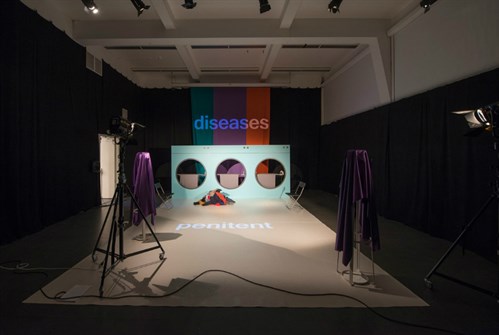 As sometimes you say the works are encountered after the events, in the debris or residue of a performance, how does this encounter differ from witnessing the live performance?

You can never get back the moment of a live performance, even if you document it with the very best camera it is still not the same as the experience of actually being there. For this reason I usually try and avoid filming performance. However, as you say, I do show the results or residue of the performance. This is an entirely different encounter for the visitor as they are placed in an environment where there are traces of past activities and they have to construct in their mind what may have possibly happened. I try not to ‘tidy-up’ the performance space, leaving it as true to the end moment of the performance as possible. This may mean it is a very messy space for the viewer to enter with debris spread over the floor. I often wonder if the viewer is carefully considering where to tread, avoiding certain objects, or if they see the space as place that they too can interact with. Occasionally seeing other people's footprints there often confirms their curiosity to walk inside the environment.

I would say there are a handful of artists who have been a fairly constant inspiration to my practice, occasionally others are added to the list, but I tend to follow a select few. Goshka Macuga is an artist I have been following for many years, and recently even more intently after her piece at the 8th Berlin Biennial. I am interested in her use of objects as performers, or as I see them, as costumes, and her analytical approach to making work. Macuga is probably the more refined end of my artistic influences and someone like Marvin Gaye Chetwynd is at the messier and more chaotic end of the spectrum. I think I need a mix of mess and refinement from the artists that I admire to get a healthy balance in my own work. I am however very much influenced by contemporary theatre and dance, as well as fashion and costume, just as much as I am by art. At the moment I am really interested in the Italian theatre group Motus, who have an emotional connection to political issues.

I have quite a few shows coming up this year, many of them include making new work. I am part of a touring show called Arctic Hysteria (not the famous show from MOMA PS1) which is touring to St Petersburg and New York, curated by Locus. The work I am developing is a contemporary version of a play written by Catherine the Great about a shaman in Siberia. I am de-constructing the play, and placing Catherine inside her own work as a character. I then have an exhibition in Stavanger, Norway at Studio 17 and am part of a performance festival in Heimdal, also Norway; the works in both will be part of my ongoing newspaper series looking at papers as a score or script. In the UK I am taking part in a collaborative project with the University of Bath, Bath Arts Fringe and ICIA to make work in response to research being conducted at the University, I will be working with the Centre for Analysis of Social Policy. As well as all this I am developing the rest of Mayakovsky’s plays and working with the Roma community to create a piece about their situation. So it’s going to be a busy year I think, but I am very much looking forward to it! 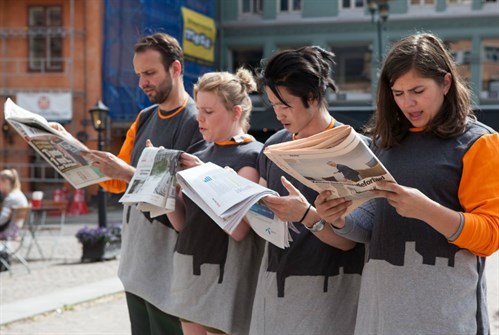