Home Thinking and Ideas 2015 10 Artist of the Month: Laurie Lax

Artist of the Month: Laurie Lax

Laurie Lax, our Artist of the Month for October, tells us about drawing, Leafcutter ants and frozen lakes 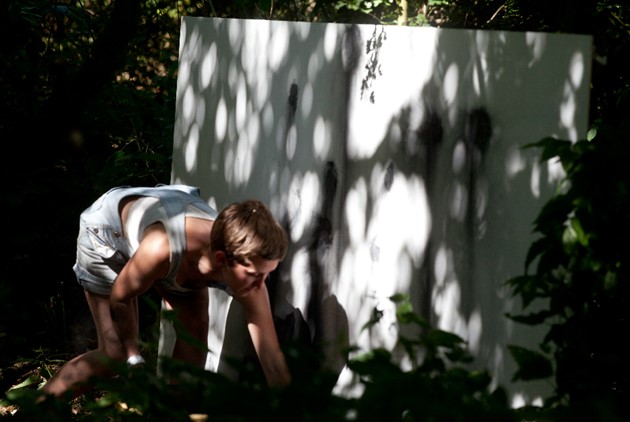 You describe your work as 'drawing in the expanded field', tell us a bit more about what this means....

Drawing is essentially depositing layers of raw material onto surfaces. Isn’t it amazing that the modern day pencil derived from a lump of graphite found in the ground in Cumbria? Lots of things can be considered drawings but contradicting that, I’m interested in the simplicity of traditional drawing too i.e. charcoal or graphite on paper. This has lead me to depositing many other raw materials on surfaces – charcoal powder onto ice and sand in Oblong (Kuršių Marios & Parnidžio Kopa); river silt onto gallery surfaces in the New Cut series; sandstone onto floor with 18ft of Solid Rock. For me it’s important to question what a drawing is and how it affects our perception of time and space.

Charcoal, a traditional drawing medium, is also an ingredient for making explosive saltpetre; when activated, it has medicinal properties. This fascinates me, so I made ‘edible drawings’ in the form of Charcoal Biscuits (served with cheese and quince membrillo) for a Spike Associates event. Graphite, pencil, lubricant and precursor to graphene, is also the main component of a highly classified bomb nicknamed ‘Soft Bomb’. I learned this through making loosely woven props for a collaborative video during my residency at Nida Art Colony in Lithuania this year. The textile pieces are filled with graphite powder, and then thrown to leave marks upon impact whilst creating dust clouds.

Another traditional attribute of drawing is its relative flatness. This year saw the start of my imagining flags as moving drawings, which I’ve made for a variety of events (New Year New Noise at Arnolfini; The Drawing Lab at RWA; Supernormal Festival’s Phlaag Pole commission). 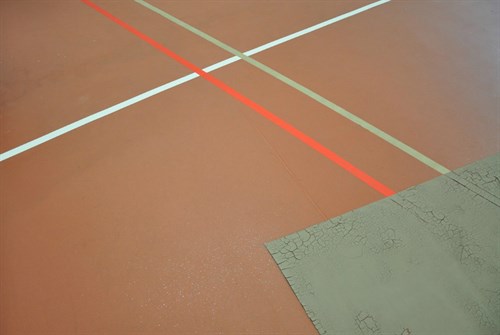 I notice that you travel a lot, how does this influence your practice?

If it suddenly froze over in Bristol (where I live) I doubt I would gather wood to make 3ltrs of charcoal powder and then sieve it though a rectangular grid onto ice. Yet seeing the gigantic frozen lake (Kuršių Marios) in Lithuania last year afforded me the time and space to act on such an impulse.

Travel provides new perspectives, which are the things that influence my work. Away from everyday distractions, travel opens up the possibility to hear stories, make connections, compare and contrast.

Very recently I was fortunate enough to visit the Amazon Rainforest in Ecuador, through my work as Studio Assistant to Mariele Neudecker. Unsurprisingly I was blown away by the biodiversity, an interest already evident in some of my previous work. I saw things that I feel I must share and am motivated by that trip to make a new body of work. 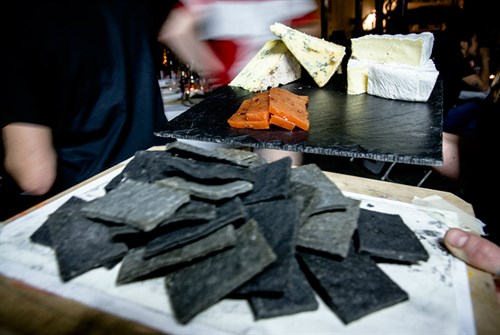 Tell us a bit about you go about creating new work and developing ideas? Where do you go for inspiration? Do you do a lot of research or work with materials and actions more instinctively?

Most of my work has a durational quality and involves time-consuming processes, so I work best in solid blocks and that’s why I need to take myself off. I go in search of rural places and residencies to let ideas unfold naturally over substantial chunks of time, which does involve un-broken research time. As well as having the time to read, it’s also important to empty one's head, to allow space for new ideas and lessons to cross-pollinate. Ideas can be acted upon immediately with fewer options in remote areas. Perhaps this is because I’m away from distracting city trends but I’ve found art-interaction in these places can be especially potent. If an idea can stand up in the middle of nowhere, hopefully it demonstrates integrity, but that’s not to discredit urban areas either.

When I’m in Bristol I tend to work to deadlines. Usually there is a specific context in the city, like an art and music crossover event, so I’ll be driven by the collaborative effort in those cases. Either that or I’ll be working through material gathered from being away!

Working in natural landscape and with natural materials is something I don't feel so many artists are doing at the moment, what drew you to working in this way?

That is hard for me to say. In my head I relate less to Land Art or landscape artists than one might predict. The charcoal Oblong pair was an effort to put rectangles into the landscape rather than the other way round. There are many other important subjects to address but personally I feel the bottom line is always environment.

Maybe it’s because I grew up spending much time on my mother’s allotment, between fascination and boredom. I know it has something to do with being resourceful and using what is available to hand, it’s always more impressive to make something out of nothing.

Another drive is to use drawing as a way to look deeper into overlooked biological specimens. There is a lot of learned disgust about mud, insects etc. but if you spend a week smearing river silt onto gallery walls, skin thick and wet, it gains a seductive surface quality. Then I like to watch how natural materials behave, like silt cracking, or chlorophyll changing from green to brown, or charcoal melting ice. Perhaps I should have been a biologist! 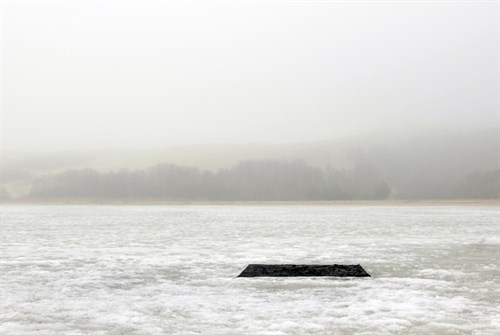 Seeing Renzo Martens’ contribution to Artes Mundi 7 was a real turning point for me this year. Palm oil plantation workers' self portraits rendered in mud, then 3D scanned, sent to Belgium and cast in chocolate – ingenious. He is treading a fine and controversial line; his work explicitly talks about our relationship to resources and the economics of ‘the art world’ at large. Even if his ‘gentrification of the jungle’ art institution fails, he is exposing much in doing so. Being a 'consumer of images of poverty’ myself was something I had never thought of before. I also admire the way Martens does not shy away from glaringly obvious facts, whilst managing to incorporate it into his work in a completely self-aware manner. Artes Mundi 7 had a refreshingly bold rosta of artists, like Theaster Gates who won the prize money and shared it with the other contestants. I’m looking forward to seeing his work at Situation’s Art Weekender Bristol & Bath in October.

I’ve just started an etching course at Spike Print with the brilliant Martyn Grimmer, which was awarded via Spike Associates. I want to marry my current interest in ‘sequential drawing’ (i.e. the comic strip) with a particular biological curiosity I saw in the rainforest – the Leafcutter Ant. I managed to smuggle some cut leaves back so I’m hoping to incorporate these into abstract motifs, in order to make multi-plate interchangeable prints. I’m also working on two collaborations: Passenger: a city train tour project with Robert Prideaux in Berlin; and Soft Bomb – Comic Strip Of A Film Of A Play Inside A Drawing That Might End Up As A Comic Strip Again, which is a collaboration with Holly Mclean who now lives in Glasgow. An offshoot of this will be published in BOX, a ‘feminine art zine’ in Bristol in November. 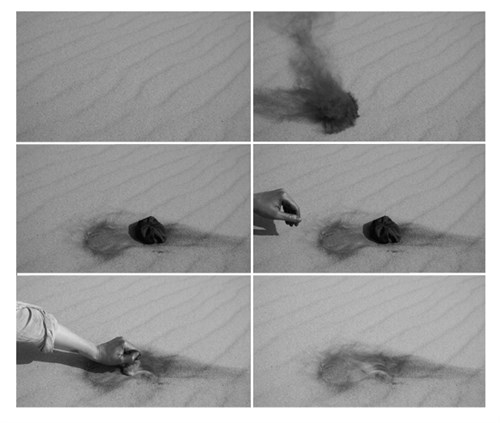 Sequence of the stills from the Soft Bomb project, 2015