This month we talk to Holly Rowan Hesson. She tells us about exploring abstract photography, studio practice and her love of painting

Describe your work. Is there a particular piece you’ve made that represents a turning point in your practice?

I make abstract, increasingly sculptural works and installations exploring uncertainty and transience through intuitive interrogation of material, often juxtaposing the light and ephemeral with the solid and heavy. I use photography, projection, sculpture, painting and printmaking.

I’ve made two pieces very recently which feel like turning points. Most of my work to date has had a root, albeit under layers of physical manipulation and reworking, in abstract photographs I make responding to particular manmade sites and buildings and to artwork in situ. However I made 'Snagging list' and 'Holding pattern' with a focus very much on thinking about and responding to materials without any direct base in my photographs, although the choice of materials were still very much rooted in my concerns around transience versus longevity and the physical spaces in which artworks are displayed, stored and made.

How much time do you spend in the studio? Are you disciplined?

Pertinent question as I've just completed an unplanned studio move which interrupted my work just as I was just getting to an interesting point experimenting more intensely and directly with materials. My new space is just about back in action and I'm so excited to be able to get some focus back.

I’ve only recently come to realise that my studio work definitely includes all the time I’m researching, thinking, scrawling, moving things around in my mind as well as physically – which is pretty obvious since all of that is so integral to my process although it isn't time spent physically making works. So, yes lots of time in the studio and where I could do with being more disciplined is actually switching off from that constant loop of ideas, research, thinking and planning now and then! 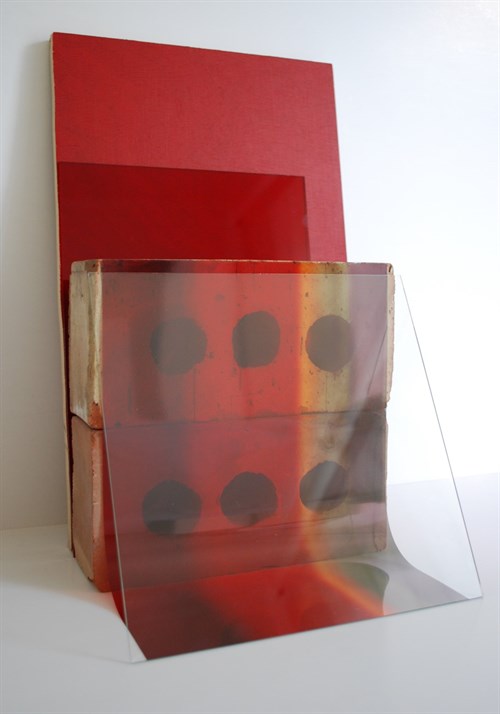 My work does often get described as having the qualities of painting, which is really astute. I only rarely let loose on the paint but deep down I know I need to let myself go there despite my fear. I’m obsessed by abstract painting, particularly abstract expressionism, which I guess comes through.

You only graduated fairly recently. What’s kept you going in that difficult time after graduating?

I did a practice-based MA pretty much from a standing start, just a year of a community college approximation of a foundation course beforehand (my BA was years ago and in French Studies!) It was pretty mind bending and although I got a Distinction, I felt I only started to understand and explore my current work during the MA final solo show I organised myself. That comprised ten days on site in a huge undeveloped concrete shell of a building making all new work from scratch responding to the building and creating a show on the final day, which all seemed perfectly doable when I dreamt it up! The actual enormity of the situation in reality was incredibly intense and my response to that has shaped my work since then.

So basically I’ve kept going because I feel like I’ve only just started to scratch the surface of what I’d like to do and don’t want to waste time because I’m pretty ambitious about the sort of work I’d like to make and what I’d like to do in my career and that’s exciting and motivating (albeit also insomnia-inducing a lot of the time...)

I was delighted to receive an Arts Council England Grants for the arts award in March which gives me time to focus on practice research and development, ultimately resulting in a body of new work and including a solo show in early 2016.

So I can concentrate on developing my work, for the rest of this year I’m not really thinking too much about exhibiting. Instead I’m working a lot in the studio and planning a series of visits to see artists, galleries and work I’m interested in as well as potential fabricators and suppliers of the new work I’m planning which will include much larger sculptural pieces and industrial materials. I also have a project mentor and lots of other support in kind around me which is proving invaluable. It's a really exciting time!

< What is art for? Mozilla Foundation and Axisweb experiment >