Home Thinking and Ideas 2015 06 Artist of the Month: Stuart Robinson

Artist of the Month: Stuart Robinson

Our Artist of the Month for June, Stuart Robinson, talks to us about the influence that film and fantasy have had on his photo-sculptural installations 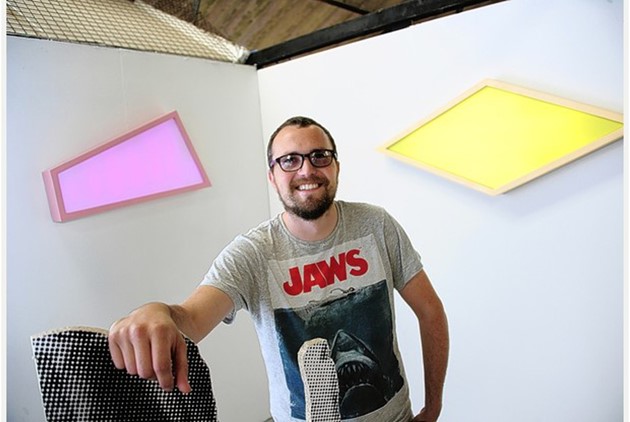 Lesley Guy: Describe what you do. What are you working on at the moment?

Stuart Robinson: I would say my work is predominantly installation and sculptural objects informed by, and utilising, photography as an important element of the working process. I like to produce objects and environments that are intriguing but overall visually engaging, often using seemingly familiar objects and shapes.

I’m currently investigating signage in various forms and am working on a series of screenprints based on marks and remnants left by removed and missing signs. I find screenprinting a satisfying way to produce two-dimensional work as the process and layering fits comfortably with the aesthetic and process that I enjoy while making sculptural work.

LG: What are the ideas that drive your work?

SR: There are quite a lot of varied influences on what I do but a lot of it comes back to an optimism about the future, or a certain type of melancholy or nostalgia for a past that no longer exists. Some of the work from my Get it Here show is looking into the ideal of a future that was promised but never fully came to fruition as illustrated by atomic age Las Vegas and a plethora of sci fi films and television.

I’ve tried to parallel this with the promise of the future you are fed throughout your early life, where possibilities are endless and things will only ever improve, whereas often the opposite is true. As a result a lot of my work investigates childhood films, modelmaking with my father and the way this shaped how I saw the world. I think part of what I have been exploring is the notion that you can't just sit back and expect this bright future to appear - if you follow all the brightly lit arrows and neon signs you just get lost. 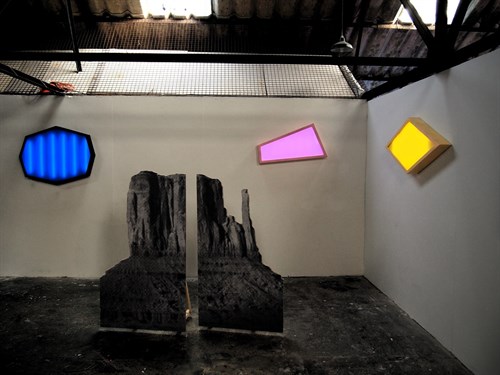 LG: The cinema plays an important role in your work. Say a bit about that.

SR: Film and television, for me as for many others, are a window to a world outside of your version of ‘normal’. Escapism is an important aspect for me in a film, to be taken to a different world - be it fictional, or a real place as yet unknown. Growing up in a village and never really travelling outside of the country (bar the odd school trip to Europe) the lights of Las Vegas or vistas of monument valley existed as much as fantasy as an alien planet.

Films were really, I suppose, my first access to ‘art’. From the fantastical creations of Ken Adams for the James Bond films to the cinematography of many a western.. I enjoy playing about with installation, using flat objects and mimicking the halftone print process to create environments that have a certain reality to them but are simultaneously obviously fake.

LG: How much time do you spend in the studio?

SR: Not enough, not at the moment anyway. Whilst working towards my first proper solo show last summer I was there almost every evening after work and at weekends, since then it’s mainly been in short bursts of a few hours here and there. I find it difficult to be there consistently unless there is a major project to be completed.

I’ve got quite a good set up in the studio and I’m lucky enough to work at a good FE college which enables me to use their facilities such as screenprinting and photography after hours. My studio is part of the Fish Factory, an artist run gallery and studios, and it’s great to be able to just go down to work and chat with other studio holders and see what everyone else is involved with.

LG: What is the contemporary art scene in Falmouth like?

SR: I’ve been living and working here for about 18 months now and am really enjoying the arts scene. There are some really great exhibitions in some interesting spaces but really you have to include the surrounding towns such as Penryn and Redruth. The kind of work that people are making here is very different from what a lot of people think when considering ‘Cornish Art’.

There are some exciting artist led contemporary galleries and festivals, prioritising the art over profit or potential tourist pounds. Last year's Inland Art Festival in Redruth was a great example of an ambitious and interesting arts festival showcasing a range of local artists in often unexpected and intriguing ways in unusual spaces. It was a great thing to be a part of and a much more exciting, creative experience then some larger such things I have been involved with. There’s a really interesting creative feel to the town and surrounding area, with exciting things happening across a range of art forms.

LG: What have you got coming up?

SR: At time of writing this I have some new work about to open in two different shows as part of Penryn Arts Festival; Electric River at the Fish Factory Arts Space and another in the Cultshare Show at Temperance Hall - a show with a collection of artists making work inspired by posts on the site.

Most excitingly, I’m in the process of initial planning for touring the Get it Here exhibition with two venues in Poland on the cards. Working in education the summer break is my most fruitful time so I’m hoping to get really stuck in on some new work. There are a lot of notes and visuals in my head and sketchbook that need exploring to see where they develop, which is often the most exciting part of any new project.