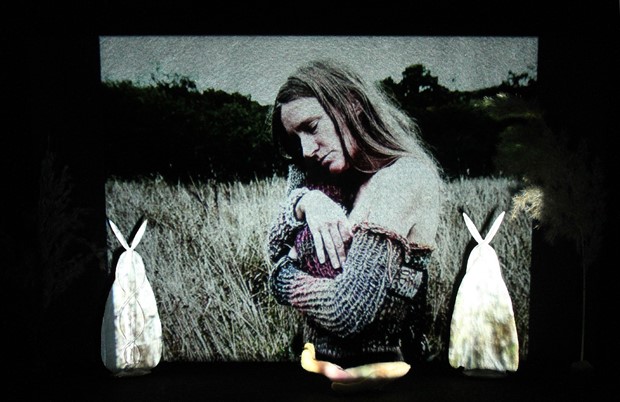 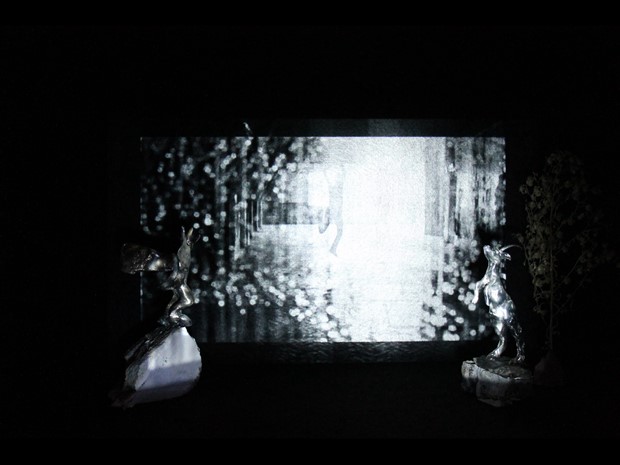 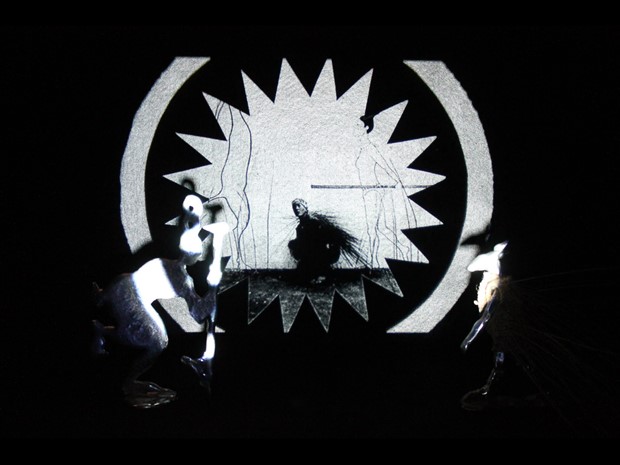 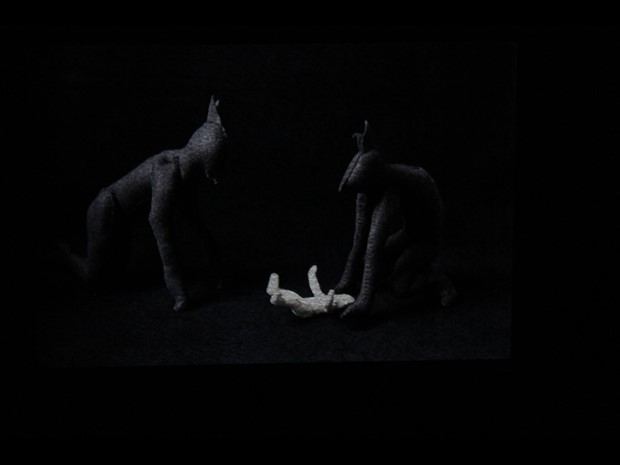 CABLE DEPOT
Cable Depot is pleased to present ‘In Real Life’ by Victoria Rance – four installations, comprised of film, sculpture and sound suspended in darkness. The films were made over the last eight years: ‘Myth’ (2017), ‘Pan and the goddess’ (2019), ‘River Mercury’ (2012) and ‘The Fates’ (2020), the latest animation made during and after the artist was fighting with Covid. The space and the films are inhabited by Rance’s ‘cast of recurring characters’ 2, such as Loki and his friends and the goddess Nuit, but these are now joined by a new set of darker and more ominous spirits, the Fates, whose plush brown felt appearance does nothing to soften their menacing presence, as they decide on life and death in a shadowy play.

A lot has changed in 2020 and Rance’s earlier works have taken on new meanings and concerns. All the year’s experiences of illness and confinement (to bed, to house, to screen) have found expression in both the new and reinterpreted earlier films and sculptures in this installation. The sculptural characters invade these films, at times appearing as viewers, casting their looming shadow onto the projections, at times becoming actors in the play, or disappearing as their flat bodies blend in and become parts of the screen.

The projections (two in black and white, one transitioning between colour and monotone, one in earthy colours) onto fuzzy black felt operate like memory flashbacks, or rather like to a mythical notion of a past life flashing before one’s eyes at an extreme moment, not just the artist’s, but a collective unconscious version. At one point black and white WWII parachutes make a slow and silent bird-like appearance, while across the way the underworld flickers on. Everywhere there is a sense of shadow puppetry theatre and all of it is harping back on memory and time and space in a dream-like confusion.

The sound was made and installed by Cole Pemberton (Victoria Rance's son, who also features in one of the works). In the space the soundtracks play together, merging, calling the viewer's attention from one place to another as the works flicker in and out of existence. They overlay in constantly changing synchronicity, creating a subtly-evolving total soundscape of dreamy recurring motifs interacting freely - like natural sounds might do somewhere outside.

The total installation is designed as an experience, which takes two very different forms. On the one hand it is a totally immersive environment inside Cable Depot, which a single person (or at most two together) can enter at a time, in darkness, and contemplate the four floating visual and aural works in isolation. Viewers are asked to book a visit via [email protected]

At the same time each of the four installations is viewable live on this website, via two 24/7 CCTV broadcasts. Each camera journeys through the space with a different rhythm and from a different viewpoint. The first spends four minutes 'looking around' at the entire space, taking in all of the four works, one-minute at a time. The second lingers at each work allowing it to be experienced in full. The online viewer is invited to drop in occasionally to catch a different moment and a different sound.

What unites the experience of either visiting locally in person, or viewing live online from the other side of our planet, is a dreamy and dislocated sense of the boundaries between film, objects, space, time and location. Definitions are blurred, and scale disrupted, so that visitors online or in real life, objects, sculptures and characters seem to inhabit each other’s dreams (in some past, or possibly future place, but also here and now).