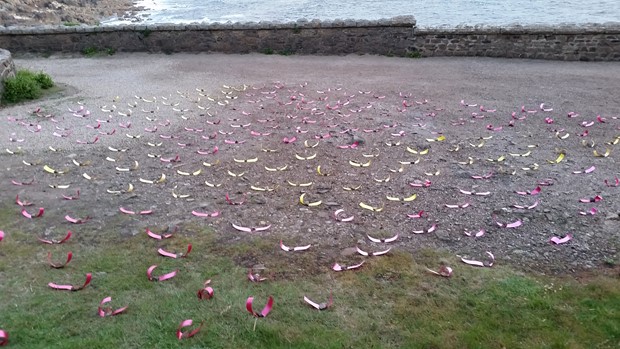 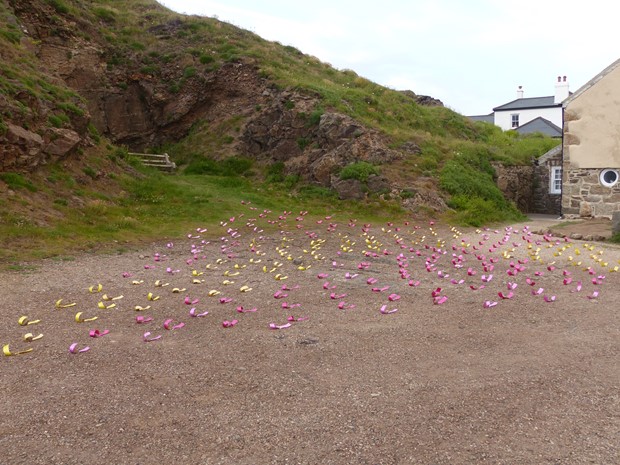 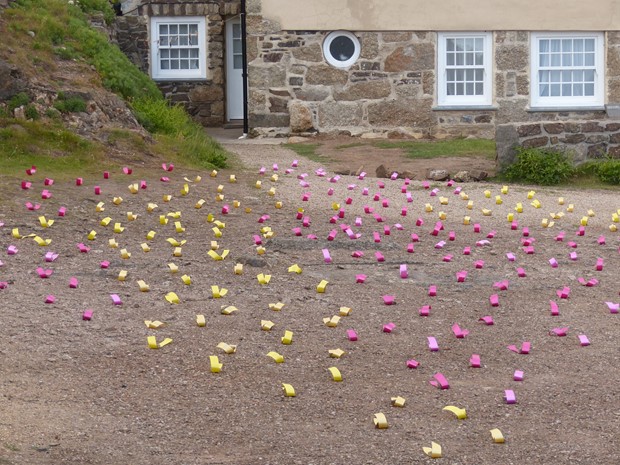 This work was developed in response to Cape Cornwall's rich abundance of wild flowers in June. Short lengths of flower ribbon were held down by rocks and arranged in a loose group. Viewed from the popular trail high above the work, the ribbon appeared as glittering phenomena, like studs or sequins, an embroidery on the landscape. The rolling and flashing of the work also linked to the movement of the ocean beyond. From the front the ribbons became almost alive and called to mind sea birds alighting and taking off, and crabs and lobsters waving their arms, turning, rising, falling, a strange rhythm with the wind. The movements had an other-worldliness to it
them, a link to the magical, the metaphysical.

The ribbon is commonly used to tie and embellish bouquets and is used here to embellish the landscape, linking to nature. The pinks and yellows were chosen to mirror the dominant colours of the wild flowers. The inbuilt curve of the ribbon was an important aspect of the work, providing shape and lift so that it was able to catch the wind. This lift then caught and reflected flashes of sunlight further activating the work. The parking area provided a relatively flat platform for the work and also the rocks for weight and anchorage as the ground was solid rock and could not be penetrated.

This work was made at the time of the terrorist attack, the hate killings in the LGBT Pulse Club, Miami, 2016, when 50 people were murdered and many more injured. Many visitors asked if the work was a tribute to the fallen on that tragic day and they expressed their concern and their sorrow. Linking the abundance of nature to the celebration and remembrance of those lives lost was a special and heartfelt moment for me. This work was also particularly well received, with many people coming off the trail to investigate, photograph and talk about it, a rare and wonderful response.