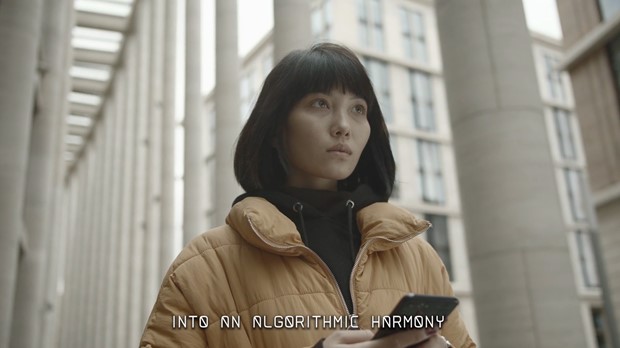 This video was commissioned by Axisweb.

This work is a critique of self-optimisation culture and the reductionist pursuit of experience into statistics. I am interested in how tracking technologies with the aim of self-improvement toward a series of industry standards (e.g. the perfect weight, the optimum speed, time spent being productive / profitable and so on) align with neoliberal ideologies of growth, entrepreneurship and individualistic pursuits as being innately human characteristics and drivers. This video ‘sells’ these
ideologies through a combination of glossy seduction and frantic urgency to persuade people to leave behind the body and human society and join the algorithmic ‘cosmos’, where you can transcend the body and live forever as your relentlessly upgrading algorithm.

Is self-quantification a quest for inner understanding? If so, what is the ‘self’, and what could be understood of it through a graph? Some initial concerns of mine are the effects of tracking technologies on people with/at risk of eating or exercising disorders, the emotional burden and effects of constantly having to meet and beat targets, the emphasis on competition between users, the pursuit of the optimum.

Metrics only go so far. I’m interested in how these beliefs in technology as ‘the oracle’ of truth as producer of metrics, is at odds with the unquantifiable aspects of human experience, and fuels feelings of inadequacy through our inability to physically and mentally keep up with the marketplace.