Upon Meeting Another Sentient Being 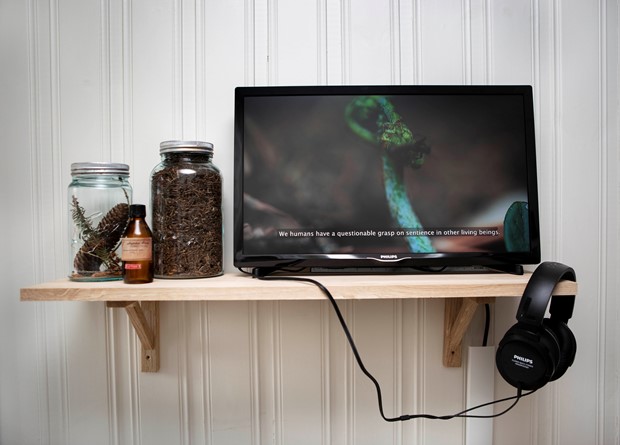 Upon Meeting Another Sentient Being is an installation and video comprised of found objects arranged and placed alongside a video screen. The artwork is an exploration into new notions of sentience in other living entities, specifically in this case exploring a wood ant colony. The installation combines specific findings from my own research into the subject matter of ant colonies as well as exploring new theories surrounding a post anthropocentric viewpoint on what sentience could be.
The video contains a voice over comprised of my own writings merged with quotes from film, literature, scientific research papers and academic texts. The objects collated alongside the video screen depict specific aspects of a wood ant colony. This includes pine needles other flotsam found on the forest floor which is used in the construction of a wood ant colonies nest, (collected from an abandoned ant nest). Other objects include flora found in the forest used in the ant colonies daily lives as food or medicine and a bottle of formic acid (maursyre), the most effective weapon of an ant colony.