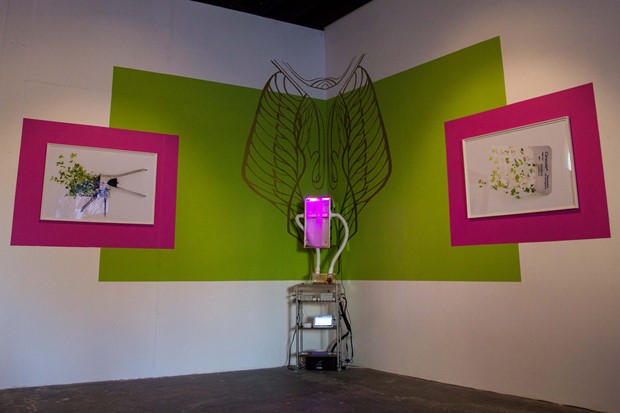 Cultural Methods is a direct response to the Cervical Check scandal in Ireland. This scandal involved the medical data of women in Ireland being withheld by medical professionals and state organisations to cover up a misdiagnosis of inconclusive smear tests. This withholding of personal medical data resulted in the deaths of many women in Ireland.
Cultural Methods takes this as its starting point and combines notions of cultural pride and ‘Irishness’ with the collection and control of personal medical health data. For three months O’Connor wore a fertility tracker bracelet (the AVA fertility tracker) at night. Acting similar to a Fitbit, the bracelet claims to collect data 25 times per second, which amounts to over 3 million data points per night. It tracks heart rate variability, skin temperature, breathing rate, sleep, and resting pulse rate.
The 84 days, or 3 cycles, worth of data have been used to control a hydroponic grow system for 84 shamrocks (body temperature controls the lights, breathing rate the oxygen pump and heart rate the water pump). Shamrocks are used in the work as the ultimate symbol of Irishness. The work is a comment on the irony of selling Irishness abroad whilst simultaneously outsourcing testing of smears to the States and England. Mother Ireland and her fertile land are still being sold as a symbol of cultural richness where the care of women’s bodies becomes something less important. This ambitious new work is in part funded by the Cavan Arts Office. This work was developed as part of Science Gallery Dublin’s Rapid Residency program funded in part by Provost’s Academic Development Fund from Trinity College Dublin.