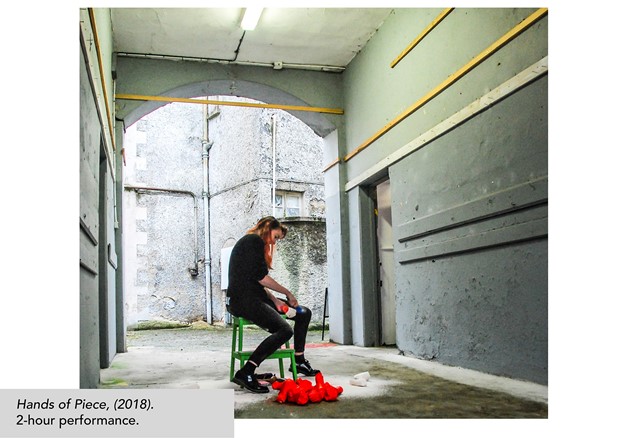 ?The ‘Arch of Peace’ by Imogen Stuart commissioned in 1989 for Market Square in Cavan has recently been removed and yet to be relocated. This performance is a response to that removal and also questions the use of the hand as a symbol of peace in contemporary Ireland.
In Cavan The Red Hand of Ulster features on the county crest, the same red hand is used in Northern Ireland to represent the six counties. The red hand therefore becomes an emblem for both unity and division. This contentious emblem of dual nationality speaks louder than a flag or a crest; it represents times of uncertainty facing the island of Ireland.
The clenched fist in these plaster-cast hands represents a moment of resistance and of feminist revolt against systems of oppression that have for so long had control over women in Ireland.
However, just as these sculptures can be carved down to dust or moved from one place to another laws are yet to be made solid or put into place. Much more than an emblem of peace the hand is a marker of revolt and resistance, and of uncertainty and volatility.