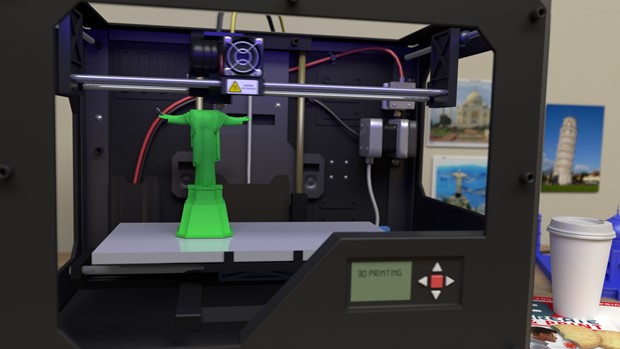 A 3D printer is used to recreate one of our most famous recent cultural landmarks in green plastic. Computer animation with sound. Production date 2017.

‘Modern Wonders.’ operates on the cusp between the ‘real’ and the ‘virtual’. 3D printing is a technology that takes the ‘virtual’ and makes it ‘physical’ while ‘Modern Wonders.’ effectively does the opposite, dragging this physical process back into the world of simulation from which it came. 3D printing, like much digital technology, has the potential to expand our senses, turning the objects of our imagination into physical reality. However, at present, its most popular use is by hobbyists to recreate objects of popular culture as small plastic models which then gather dust on shelves (for example, googling ‘3d printed Eiffel Tower’ yields 1.3 million results). In that sense, this simulation of 3D printing has a number of advantages over the physical version, saving on non-renewable resources and substantially speeding up the process (in reality each model would take roughly 5 hours to print) while still achieving the same use value.