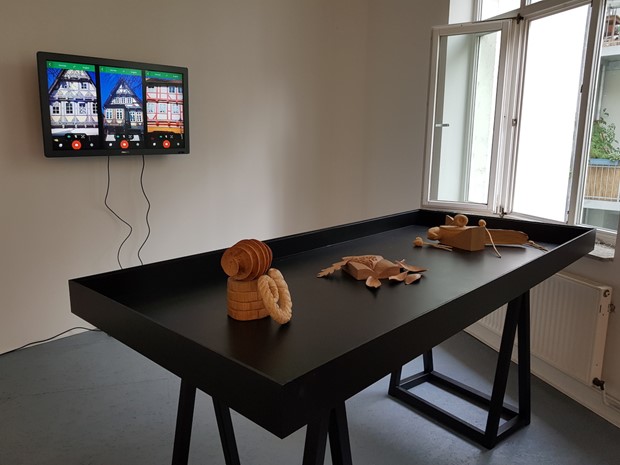 When invited to be part of a series of events to celebrate the 70 year twinning of Bristol, UK and the German City of Hannover I was initially curious about the German city and it’s past.

Hannover was completely destroyed during the Second World War. It’s traditional timber framed constructed town houses (Fachwerkhäuser) were largely raised to the ground leaving a token amount nestled within Hannover's old town. The city is currently monopolised by brutalist post-war concrete structures, a very different landscape to that of the past.

To gain an incite into the complete experience of being in a town that was completely wooden, I visited the neighbouring town Celle that was largely untouched by the artillery and bomb damage of the Second World War. When investigating the heavily carved facade of the townhouses I noticed a series of text elements engraved into a certain type of supportive beam. As an artist not fluent in German I turned to GoogleTranslate to assist in my understanding of this text.

GoogleTranslate Description (how it works)

When using this mobile technology I realised that the text I was interested in described the architect, date of construction and if and when the building was renovated.

When I took a step back from the building the technology started to glitch. The mobile phone app started to analyse and interpret the high contrast beams, window frames and even the invading tree branches as text for it to interpret.

The resulting video was analysed frame by frame to identify common nouns that where subsequently used as an instructions of what to make from wood. Linking sculpting material with source material, timber.