With new work in the international touring exhibition 'Transitional States', Holly Slingsby discusses her auto-ethnographic approach and foray into making work about fertility and infertility.

What does the title of your work Eostre Eats Estradiol mean to you?

The title refers to the pagan goddess Eostre, and Estradiol, which is a hormone used synthetically to regulate the female reproductive system. As such the title encapsulates way that the work explores belief systems pertaining to both ancient and contemporary fertility practices.

You use performance-to-camera to capture your personal exploration and ongoing experience of undergoing fertility treatment. How does this medium address these concerns?

Video as a medium allows me more control than live performance, in terms of framing, sound, editing and so on. In terms of making work about something personal this control is valuable. However the performative aspect remains important; I want to embody mythical characters and talk about a subject that relates to the body, so actions are integral to that.

Framing the taking of synthetic hormones for IVF as a performance around a character representing mother goddess what do you think happens to the reality of the issue in the process?

I often think that looking at something indirectly - evoking it not illustrating it - can be a more powerful and thought-provoking way to get at an idea. It’s a kind of deflection, in that making a straightforward documentary would feel more exposing. But I hope it’s also more imaginative, more inventive, and I think that’s the role of the artist. 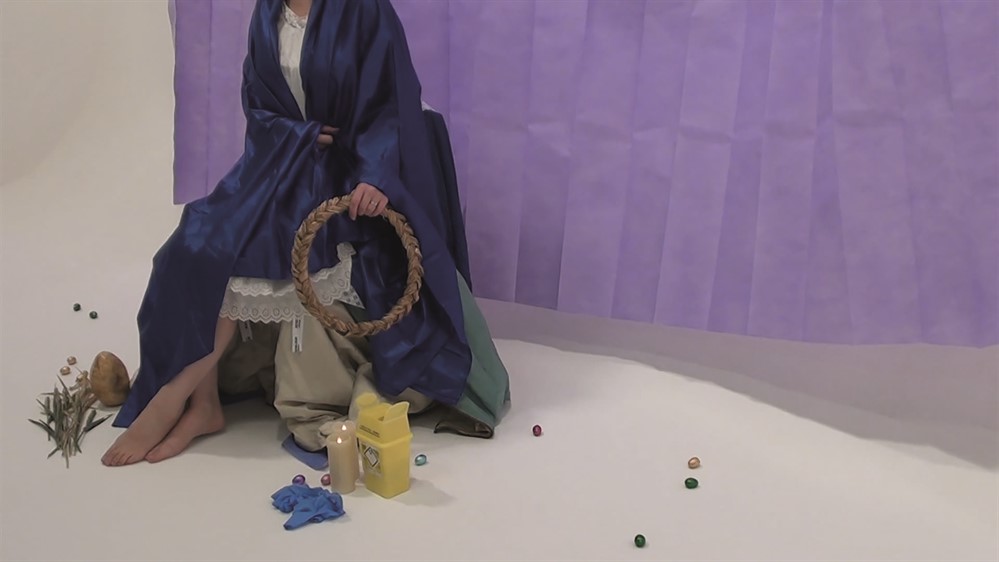 By unravelling the complex and emotional threads inherent in your work Eostre Eats Estradiol do you feel conflicted between the space you occupy as artist, as a recipient of the treatment and the belief systems surrounding assisted reproductive technology?

Yes definitely, ordinarily my personal life doesn’t directly come into the work I make. It’s not something I deliberately set out to do, more something which was organically becoming apparent in the work and that I eventually chose to embrace. It’s cathartic. I also believe there’s a value in making work that speaks to underrepresented experiences, and infertility is one of those.

By appearing in your works, you put yourself in a position of vulnerability. What is at stake in such openness?

The work is auto-ethnographic, in that my lived experience is part of the research. In that sense I would appear in the work whether my image was in it or not. Embodying the roles of fertility goddesses - Demeter, Eostre, Mary - becomes a way to playfully suggest invoking them and that’s an idea which has been present in my work for several years. By continuing to use methodologies I’ve employed before, the risk of making the work more personal is reduced - the mode of work is the safety net while the content feels unsafe.

In your films there is often a playfulness but a definite underlying tension where you seek to make a certain kind of visibility that precludes understanding. How would you describe your intentions towards the viewer?

I want to make suggestions to the viewer, offerings rather than definite statements or instructions. There has to be space for them to bring something to the work.

Can you talk about the role ritual and transformation play in the conceptualisation of your work?

To me ritual is a key part of belief, because when you take part in a ritual you’re enacting a belief and hoping to bring about certain effects by that action. In terms of fertility treatment transformation is more measurable, the outcomes more evident. But it has a ritual aspect, such as taking injections at the same time on a daily basis, and investing a faith in the efficacy of those injections.

What is the relationship in your work between meaning and aesthetics?

All of the props, costumes and scenery in the work act as visual clues. For example, in this piece a lot of the action is set against a hospital curtain which is like a medical equivalent to the ‘cloth of honour’ used as a backdrop for figures in religious painting. I was particularly looking at works by Carlo Crivelli when developing this piece. The wreaths of objects in the video are similar to commemorative wreaths of medical paraphernalia which IVF patients share on social media. These are absolutely contemporary and they look very totemic. My wreaths additionally include chocolate eggs and rabbits - the traditional attributes of Eostre which have been translated and commercialised for Easter.

What does this work represent to you artistically?

I really think that risk-taking is integral to art making, and without it you can’t push into new territories. I hope this initial foray into making work about fertility and infertility will be the start of a new body of works.

Can you talk about your involvement with Transitional States?

Transitional States is an international touring group show about hormones. I submitted this work for it and was selected by a jury. The exhibition includes works about the use of hormones in many different contexts, and I’m excited to be showing alongside artists with a rich diversity of experiences. The show is about to open in Lincoln and it tours to London, Barcelona and Bologna later this year.

You also have a new book Knotted Mass II.

Yes, this book is a companion work to a performance of the same name which I made in 2016. The work explores mythology relating to hair, ranging from fairytale characters to pop-culture icons. As much as being about hair, the work is also about how images and the narratives attached to them get transported across different cultural contexts. The book includes the images and texts from the performance, as well as drawings and a specially commissioned text by Beth Bramich.

Eostre Eats Estradiol is on view as part of Transitional States at Project Space Plus, Lincoln until 27 February 2018. It then goes on tour to London, Barcelona and Bologna.